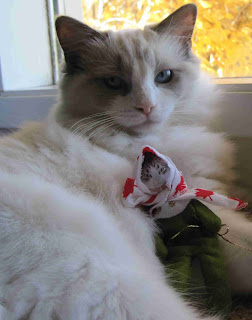 Cloon: Joining me is the Secretary of CCC with her update on the next component of her Bootcamp: Assembly Line Production. Hello Princess Neytiri.

Cloon: So tell me how this latest component of Bootcamp went with the Elves?

Neytiri: Those little buggers have some interesting personalities.

Cloon: I guess they take after me, huh? Did you end up increasing the efficiency of their production on the Assembly Line?

Neytiri: But of course. My Bootcamp worked like a charm!

Cloon: What did that all entail?

Neytiri: We started the day at 3:30AM with some Feline Zen meditation. Then we went outside into the crisp air for a jog, jumping-jacks and push-ups. "Give me 50 right now!"

Neytiri: Ok, I'm just pulling your paw, but it did work on the Assembly Line Elves. Then with a clear mind and a good appetite we had a Num-Nums break.

Cloon: That would be my favorite part.

Neytiri: Then we got serious. I set up the projector, showed some clips of inspiring felines around the world, we did some role-playing and had a miniature pep rally. Then when the Elves were all "pumped-up" I lectured about the importance of efficiency on the Assembly Line and how we need to increase our production of Clooneymobiles pronto! I showed charts and graphs for the expected efficiency for the upcoming quarters and we discussed the incentives for reaching the specified targets. If targets were reached according to plan each Elf would be given their own case of Num-Nums to eat at their leisure and I would also take them on a special field trip (the details of which are yet to be determined). After this discussion, I observed them at work on the Assembly Line and gave some constructive feedback. Then we had another Num-Nums break and a nap. After the nap we started the whole process over again right from the Feline Zen Meditation finally ending with Num-Nums at the evening meal and beddy-bye at 7:30PM. We did this for 19 days straight and had our graduation ceremony last night.

Cloon: How did they all do?

Neytiri: They passed with flying colors! Each one has been awarded their "Certificate of Achievement in Assembly Line Production". Also, they were each allowed one mini mug of ale to celebrate and all are in high spirits.