BE WELL MY SWEET INKA 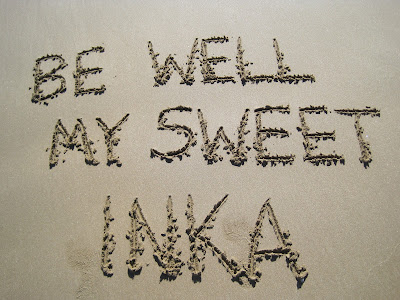 “Just come look.”  Three little words that can change your life in an unexpected but beautiful way.  It all started with my co-worker asking me to come look at kittens that she had seen an ad for in a nearby 7-Eleven.  I was not in the market for an addition to my cat family at that point in time, but her power of persuasion worked on me and I decided to “just go look”.  We entered an environment with three bulldogs barking their heads off and in the midst of all that commotion were two tiny, fluffy female kittens.  A stray mother cat had been using this person’s garage as a place to take care of her babies and when they were old enough to be weaned the lady had brought them inside her home to take care of.  My co-worker immediately chose the kitten she had wanted of the two so I picked up the remaining one and held her in my arms.  The poor little thing had a crooked tail (seeming like it had be broken at some point) and runny, infected eyes.  But as I held her against my chest, she didn’t move a muscle which is quite unusual for a six week old kitten.  She stayed completely still and snuggled in and didn’t stop purring.  In that moment, I felt what Bella did about Edward; I was irrevocably in love with her.  She had such an undeniably sweet, sensitive, gentle and loving nature.  I absolutely knew without any doubt whatsoever that this imperfect little being was my cat.  In fact, holding her in my arms that day would end up being one of my most significant life events and memories.

I named her Inka after my fascination with , specifically .  My dream was always to travel to and see the Incan ruins.  She integrated very quickly with my cat at home who was eight years older than her.  Doogie Howser PhD took her under his tutelage and all was well.   To begin with Inka was silent and didn’t meow or make any noises at all.  I taught her to meow by repeatedly asking her the question, “Where’s babe mousie, well where is babe mousie?”  I was of course referring to the little gray furry toy mice that she loved so much.  To begin with she would mouth a silent meow, then came a little crackle and finally she formulated a tiny meow each time I would ask her the question.  Inka was a lady very feminine and proper with extremely long white whiskers and a precious pink nose.  She followed me around constantly and slept with me every night.  She was very affectionate and liked to lick my cheek and my hands.  We had a very special, close bond.  She loved tuna and I swear whenever she heard the hiss of air escaping any can, she would surface deep from hiding expecting some tuna.  She was the greatest insect catcher ever, none made it past her.  She also loved going under the blankie, lying in a spot of sunlight and in the breeze of an open window and she loved a quiet, Zen environment.  But most of all, she loved the sound of my voice.  Whenever I spoke out loud she would come out of where she was and sit right beside me.  She was very skilled at this “eavesdropping” and even conducted seminars on the “art”.  Inka had a strong mother quality to her and after she survived the death of her companion (my Doogie) it was evident that she needed someone else to take care of.  So, I found us our guy on the internet.  He was a gray cat and I named him George Clooney.  She accepted him after a week and slowly the romance started to blossom.  He is quite a character, my Clooney so she had lots to contend with.  He provided a lot of entertainment for her, they played together everyday and she always reminded him that she was in charge when he got carried away with his roughhousing.  They had a very close relationship with her grooming him several times a day.  Let’s just say, the guy was very clean.  Often they slept together in different locations.  She was our rock, the soul of our home.

Out of the blue one day, six months after Inka’s tenth birthday, I knew something was wrong.  She had been sleeping in the closet for two days in a row and didn’t come out to greet me when I returned home, which was very unusual for her.  There began numerous vet visits as she stopped eating, drinking water, and spending time with me.  After examinations, x-rays and an ultrasound we found that she had breast cancer that had spread to the liver and lungs.  In bringing her home she would hide in the furthest most place she could so as to be by herself.  She gave up her will to live as she was like a limp ragdoll in my arms whenever I picked her up to feed her or place her on the bed next to me at night.  The whole situation was very heart-breaking as she was only ten years old and it all happened so unexpectedly.  In a world where I was uncertain of many things, she was always my one certainty.  I never envisioned spending this next ten years without her.  So, I was forced to make an unbearably painful decision of letting her go in peace as the quality of her life was no longer there and when I looked in her eyes I knew the decision I had to make.  It was the hardest thing I have ever done to date and the most painful.  I said goodbye to my beloved Inka on a Wednesday morning at 10:56.  That was seven months ago.  She was so much more than my pet cat.  She was my kindred spirit, my little girl, and my daemon (part of my soul in an animal form).  I take comfort in the random quote that came into my email the morning of Inka’s passing that said “When nothing is sure, everything is possible.”  In having loved the cats in my life, my heart has broken wide open for these little critters but I wouldn’t have it any other way.  So, that’s how it is with love…they say you find it when you’re not looking.  I hope someday in the future, when I’m not in the buyer’s market, someone will convince me to “just come look” and if I’m lucky enough I’ll find her again…Or if not her, another fluffy little ball of love that I have a profoundly special connection with.  I hope…


(Submitted in March 2010 to Chicken Soup for the Soul: My Cat's Life) 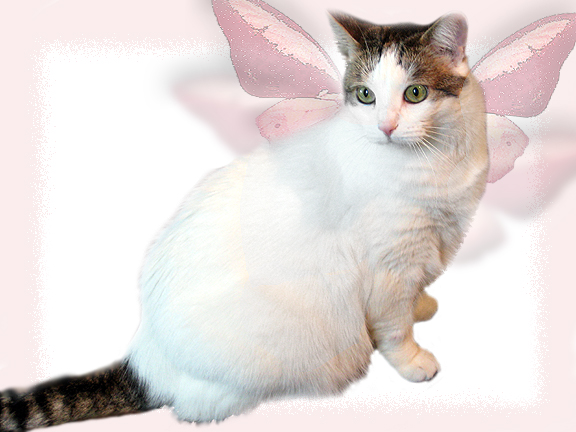 I wish you peace, comfort, grace, ease, love, blessings and Angels surrounding you...﻿I wish that Doogie greets you at the gates of kitty heaven with tuna and a furry, gray babe mousie.  I wish that there is an open window with sunlight streaming in and a nice breeze for you to lay in watching birdies...A piece of my heart went with you today and you will always be profoundly missed...
I thank you for the rare love you shared with me... 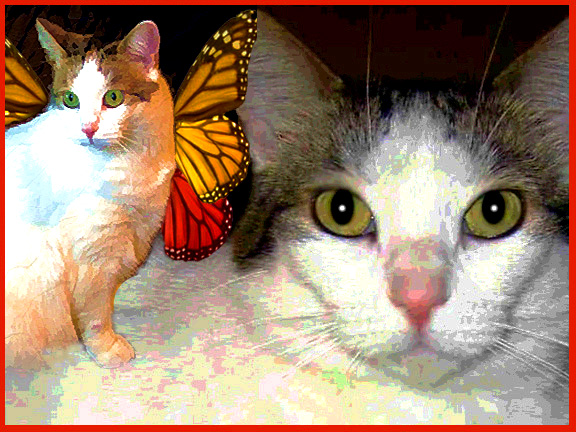 I miss you. I miss how you instantly appeared like magic, from wherever you happened to be, the second the can opener punctured the tuna can letting the air escape with a little hiss...I miss the adoring, concerned and soulful look in your eyes whenever I talked to you...I miss you studying my face with your eyes...I miss you licking the lotion off my hands at night when I went to sleep...I miss finding your long, white whiskers in different parts of the house...I miss your sweet pink nose...

Be Well My Sweet Inka 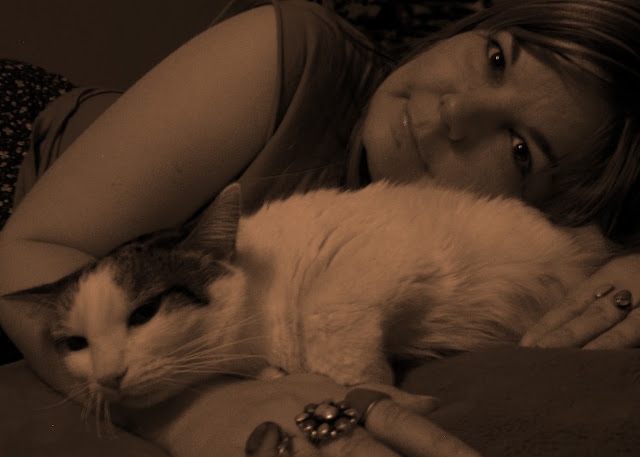 (Last photograph with Inka, the day before her passing)

I had been asking you to visit me in my dreams since you passed away and you finally appeared last Saturday morning. I was in a movie theatre before the film started and I saw you hiding under one of the seats in the middle of a row. I got you out from under there and walked to the aisle stairs. I was holding you in my arms and you were as light as a feather. (Years ago, I had a similar dream after someone else passed on where I was holding them in my arms and they were also that light.) You and I had the same special connection as the very first time I held you. You were very much at peace with me holding you. What I felt most was your sweetness. I got such a strong sense of that. That sweet essence of yours was so strong both in the dream and when I awoke right after that I knew it was a visit rather than a regular dream. So thank you for that. I hope there will be more to come...

Be Well My Sweet Inka 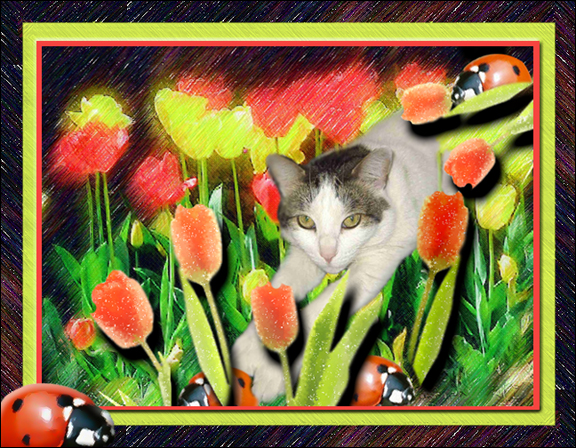 A ladybug came to visit on New Year's Eve and I'm thinking it may have been you. It flew onto my glass of wine and sat on the rim. It also flew right onto the words Santa Fe on the front page of a newspaper that was lying on the kitchen table. (Santa Fe is my favorite place and spiritual home.)  You had always liked ladybugs and would always be watching them and following them around our one apartment that ended up having many ladybugs for some reason. You never tried to eat them like you did with spiders and flies. You just let them be but were always very curious and interested. I think that if something was to be your messenger, a ladybug would indeed be fitting. There's an inherent goodness and gentleness to the ladybug, just like you.  The metaphysical meaning of a ladybug is "energies of renewal and regeneration", "when it appears it is telling us to let go and let God". It is said that "ladybug teaches us to restore our faith and trust in Great Spirit. It initiates change where it is needed the most. When ladybug appears it is asking us to get out of our own way and allow Great Spirit to enter." (Sayahda) It would also be fitting for you to spend New Year's Eve (my favorite holiday) with me as you were always cuddled up to me on the couch making resolutions, the times I stayed at home for New Years.