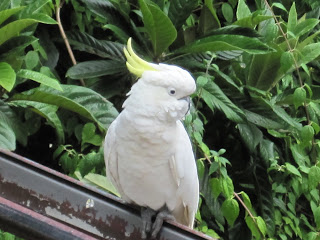 Hello there Audience. I'z gots some very exciting news for you all. My Human has gotten a cockatoo to sign the contract for my Australia Zoo in Canada. She met theese one on The Great Ocean Road in the state of Victoria. When told that we have copious amounts of wild bird seed back at Headquarters, the cockatoo signed on immediately. The cockatoo also aspires to take on some secretarial duties at Clooney Credit Canada as she has always dreamed of advancing her career in theese area. The trip "Down Under" is shaping up to be quite the success as many animals are keen to see a "White Christmas".

STAY TUNED FOR MORE UPDATES...
Posted by Clooney at 5:03 PM No comments: 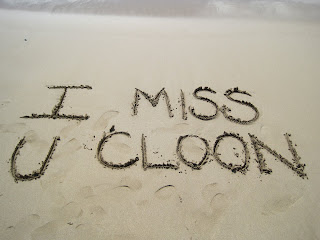 Well hello there Audience. I'z very excited today as I just received the above message from my Human. Theese one is a good one! I'z been staying at "Squirrel Sanctuary" while my Human and Pierre Du Port have been scouting out animals "Downunder" for my Australian Zoo in Canada. It's too bad I can't be with them, but I don't travel that well and I had to continue with my Clooneymobile operations here back home. The Assembly Line Elves are really high maintenance and need constant supervision. I has to make sure they don't take too many Num-Num breaks and slow up the production of the assembly line. As well as getting animals to sign contracts for the zoo, Pierre has also been handing out flyers for the Clooneymobile and we have been getting numerous enquiries. Theese has been excellent, most excellent! I just has to get the elves to figure out how to put the steering wheel on the other side of the Clooneymobile. They'z been doing some extra brainstorming on theese one. Well folks, I gots to get back to my squirrel watching... Rumor has it that Mr. L is quite jealous...

Posted by Clooney at 1:58 AM No comments: 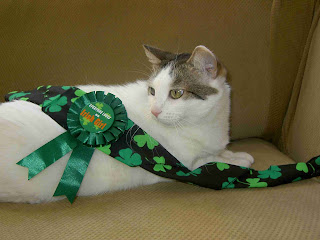 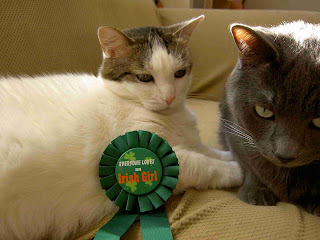 IN HONOUR OF "GIRLFRIEND" WHOSE 11th BIRTHDAY WOULD HAVE BEEN TODAY ON ST. PATRICK'S DAY
Cloon: Today is a very special celebration at Headquarters. "The Baby" and I have organized a huge St. Patrick's Day party in honour of "Girlfriend".
"The Baby": That's right folks, it's all the green beer you can drink, party games and unlimited macarena.
Cloon: The Assembly Line Elves are in fine form as "The Baby" has been leading them in the macarena.
"The Baby": Yes, it's been quite a wild one here. We've been doing a lot of practising as I am trying to get the "Synchronized Macarena" recognized as an Olympic sport to get Canada even more gold medals in the future.
Cloon: Excellent, most excellent. Good luck with that!
"The Baby": (in an Elvis tone of voice) Thank you. Thank you very much.
Cloon: Oh, there's the music again...Please raise a mini mug of ale to "Girlfriend" who is missed dearly. I'm sure she's watching over the festivities from above and saying to herself, "Oh dear!"
To "Girlfriend"! Hey Macarena!!
Posted by Clooney at 12:55 AM No comments: 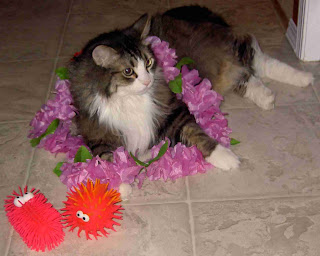 Cloon: Joining me via skype is "TIM" on location at the Great Barrier Reef, Australia.
Hello TIM, what is going on?


TIM: I'm just relaxing after a full day at the reef watching fish.

Cloon: Did you get to see some good ones?


Cloon: Do you still prefer birds or are you converted to fish now?


TIM: Well I must admit I was very impressed with the spectacular colors and variety of shapes and sizes. It was very entertaining...But no, I still am a bird fan.


Cloon: Did you have a chance to promote the "Pink Nose Society" so far in Australia?


TIM: Yes I most certainly did. I was able to get some contributions to my birdwatching fund.


Cloon: Now who are the creatures beside you?


TIM: They'z a couple of mates I met out on the reef. They came back to land with me for a brewski and to discuss hockey. It turns out they're big fans.


Cloon: Fans of beer or hockey?

TIM: Uh that would be hockey Cloon.

Cloon: Do you think you can bring them back to Canada with you for my zoo?


TIM: Not sure about that mate...they'z pretty happy out on the reef, it's a pretty good quality of life.


Cloon: You could tell them you'll take them to an Oilers game... 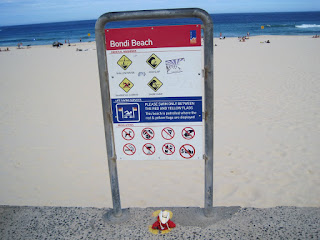 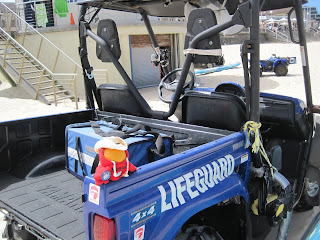 PIERRE DU PORT ASSISTS LIFESAVERS AT BONDI BEACH
Well hello there Audience. This is Pierre Du Port reporting live from Bondi Beach, Australia. I am working on my Lifesavers Certification with the blokes out at Bondi and need to clock a number of volunteer hours. Pretty rough, huh? Sorry to rub it in. Bondi rocks! "The Baby" might start coming here instead of Cabo if he knew how cool it was. No sharks, blueys or blokes drowning today so I've been chillin' out. Well back to the job...Talk to you soon folks.
Posted by Clooney at 2:35 PM No comments: 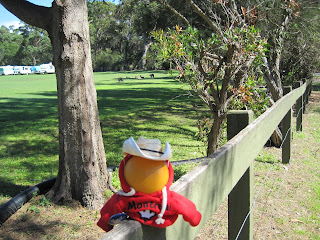 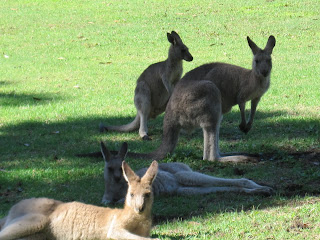 PIERRE DU PORT RECRUITS KANGAROOS FOR CLOON'S AUSTRALIA ZOO IN CANADA
Cloon: Joining me via skype once again is Pierre Du Port with some very exciting news folks. G'Day Pierre!
Pierre: Bonjour Cloon!
Cloon: We can't keep the Audience in suspense any longer. Go ahead Pierre tell them the most excellent news...
Pierre: I was taken on a kangaroo scouting trip to Merry Beach and I came upon this mob of 'roos shown above.
Cloon: Continue...
Pierre: Well, I was able to approach them quite closely as I am a dog toy after all and non-threatening. So, I gets real close and starts talking to them, making casual conversation, asking them how their day was going, what the weather had been like etc. etc. They were very taken with my accent and wanted to know where I was from. So I started to talk up Canada, the sirop d'erable, poutine, white Christmases, snowboarding at Whistler. I had them at snowboarding.
Cloon: Uh, Whistler is quite a distance from Clooney Credit Canada...
Pierre: Uh, sorry about that. You'll have to take them for a yearly trip.
Cloon: So what did they say about num-nums and moving to Canada permanently?
Pierre: Well, I really built you up Cloon. They are very interested in being associated with someone of your calibre. They said num-nums sound good because they're tired of cheerios. And of course when they found out they will be the only kangaroos in Canada, it was a done deal. They are quite excited about the celebrity status they will receive.
Cloon: So did they all sign the contract?
Pierre: They did indeed. Have Mr. L start working on the immigration papers.
Cloon: Excellent job Pierre! I'll see if the Secretary will give you a raise.
Pierre: Uh, that's me Cloon.
Cloon: Oh right, I forgot about that. So, are you willing to give yourself a raise then?
Pierre: Indeed Cloon, indeed...
STAY TUNED AUDIENCE FOR THE CONTINUING ADVENTURES OF PIERRE IN OZ....
Posted by Clooney at 1:12 AM No comments: