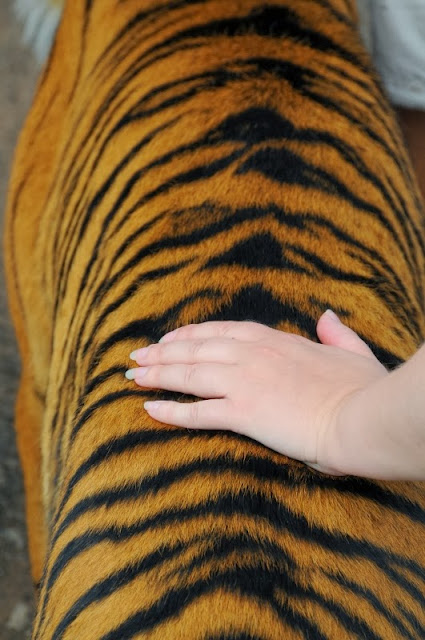 (My hand on Kaitlyn's back as we walked)

Two years ago I briefly posted about my Tiger Walk at the Australia Zoo and you can read that post HERE.  Some recent events prompted me to reflect a lot on the Tiger Walk and post about it again.  In March of 2010,  I visited the Australia Zoo and went on a Tiger Walk with Kaitlyn a Sumatran tiger who was 2 years old at the time.  She and her two siblings (brother Bashii and sister Maneki) were born on December 4, 2007 in Indonesia.  So Kaitlyn just celebrated her 6th Birthday and I wanted to wish her a big Happy Birthday! 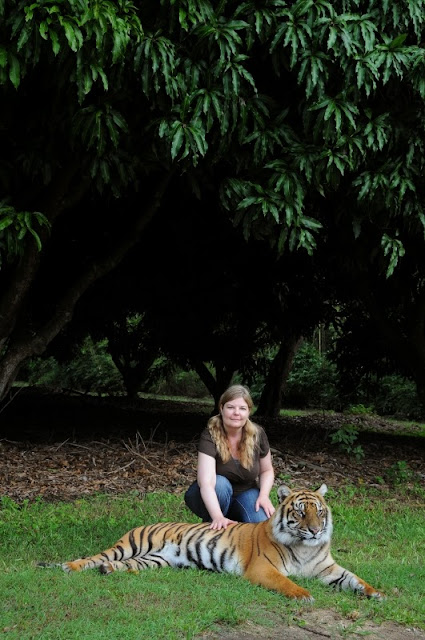 Also on the Tiger Walk were three Big Cat Handlers, Kassie, Shane and Dave.  Last week at Australia Zoo, during one of their routine tiger shows for the public, Dave was injured.  In a very unexpected turn of events and unfortunate accident, Dave was dragged into the pool and bitten thus sustaining some puncture wounds to his neck from one of the tigers he was interacting with.  (Dave has been a Big Cat Handler for nine years and had actually helped raise this particular tiger from the time he was a cub.)  It is thought that the tiger got over-excited and may have mistaken Dave for one of his favorite toys.  Dave was not wearing his usual khaki clothing but rather a blue poncho-like top with bags over his hands as an enrichment tool.  (As it turns out, some of the favorite tiger toys during playtime are garbage bags tied to the end of a stick.)  His fellow Handlers acted quickly and pulled him to safety. 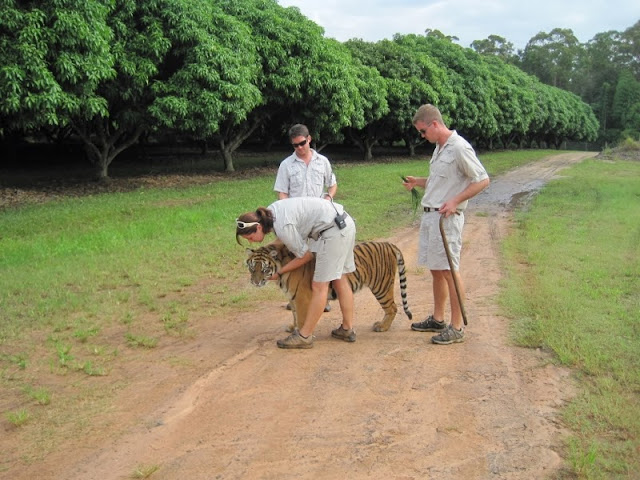 (Kassie, Kaitlyn, Dave and Shane at the start of the Walk)

Dave has undergone surgery and is currently in stable condition recovering in hospital.  (Thank God that the puncture wounds ended up missing his major arteries.) My heart goes out to him and I wish him a full and speedy recovery.  I hope that he is back doing what he loves and is passionate about (working with his tigers) very soon.

This incident really contributed to a lot of reflection for me this past week.  I debated as to whether to blog about it as I didn't want to contribute to any sensationalism of the event as the media already has.  But I wanted to pay tribute to how special these tigers at Australia Zoo are and how special the Zoo and the staff and the Big Cat Handlers are and I feel like I have a personal association with the story due to my Tiger Walk experience.  As someone stated on Facebook, "this is an opportunity to learn more".  Life is so full of mystery and can definitely contain the unexpected and this again reminds you of just that.  Things can change in a heartbeat.  Or you can do something a little differently and something unexpected can happen.  Just as a domestic cat can do something unexpected, so can a big cat and it is a reminder of the power and strength of these majestic animals. 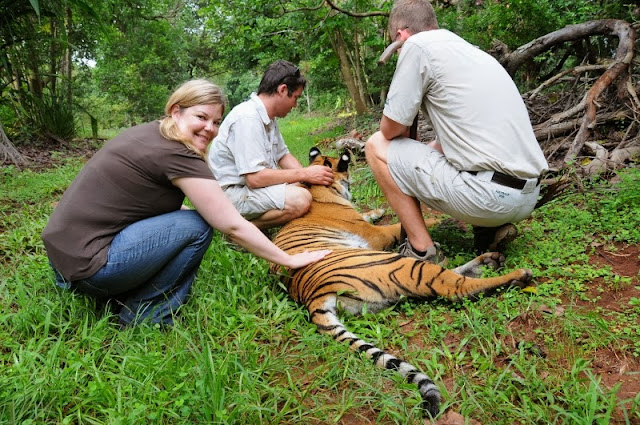 The Tiger Walk was one of the best experiences of my life.  It was a very emotional experience for me, a bit surreal and definitely an adrenaline-filled experience being this up-close-and-personal with a tiger!  There is a definite safety protocol in place for sure as the object as a visitor is not to stand out or appear "too interesting" to the tiger.  You have to wear neutral clothing, have no strong scents on you, not crouch in front of the tiger as to appear vulnerable, only touch the tiger from mid-back down (not the head), pat the tiger firmly not gently (gentle pats can apparently "tickle" them).  At the beginning of the walk, the Handlers were even more cautious as Kaitlyn was giving a little bit of attitude (not in a bad way) by "talking" and making some different sounds so they had me stay back a bit with one of the Handlers and give her more space.  The walk was all about her, reading her signals, giving her space, stopping when she wanted to.  For me to be in such close proximity to a big cat was a dream come true.  The Handlers have such a deep respect for the tigers and the bonds and relationships between the Handlers and the tigers are really beyond awe.  They are able to kiss the tigers on the head, scratch their ears, chins and tummies.  Dave even put his fist in front of Kaitlyn's mouth and she took his hand in her mouth and gave him "love bites".  The Handlers have such skill and have such love for these tigers and work daily to ensure that the tigers have rich and full lives.  They truly are special people and many of them have known and cared for  these tigers since the tigers were a few weeks old to a few months old.  Australia Zoo plays a crucial part in saving the Sumatran tiger as less than 400 Sumatran tigers are living in the wild today.    To find out more about Australia Zoo's tiger conservation projects go HERE.
Now for some really exciting news...Kaitlyn gave birth to two male tiger cubs on August 22, 2013!  She is now the proud Mama of two adorable cubs named Clarence and Hunter. 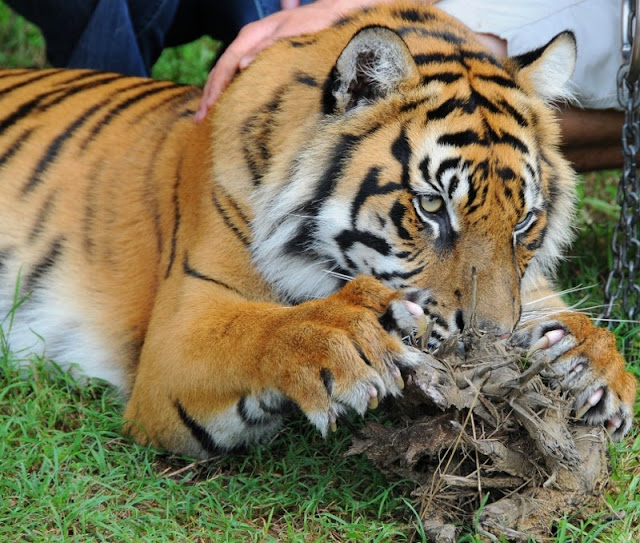 (Kaitlyn playing with a tree root on my Tiger Walk)

As Giles (the Head Tiger Supervisor) has said, Kaitlyn is considered one of the most genetically valuable tigers in the world as she was born to a mother who was wild born and a captive father.  Her cubs are the first to be born at Australia Zoo in their 43 year history.  Because Sumatran tigers are critically endangered, breeding in captivity is crucial for the future of the species.

Congratulations to Kaitlyn and to Australia Zoo!  Welcome to Clarence and Hunter!

Because Australia Zoo's images of the tiger cubs are copyrighted, I'm not able to post them but have found some pictures HERE on ZooBorns.com.  An Australian newspaper, Sunshine Coast Daily also has a video and pictures HERE.  Go on over for a Squee-Fest!