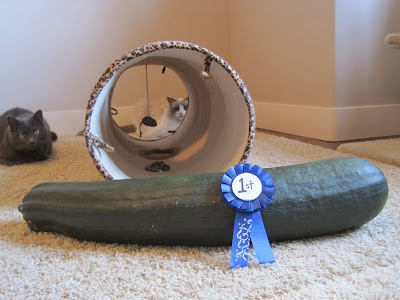 TUNNEL TUESDAY: TAKE A LOOK AT THEESE ONE!


Well hello there felines.  So I goes to my tunnel in the wee hours of the morn...and what do I find?  There waiting for me was a big zucchini!  Can you believe it felines?  If the truth be told, Neytiri and I were a bit leery of theese big zucchini squash at first...We approached it with extreme caution and observed it from the far end of the tunnel! 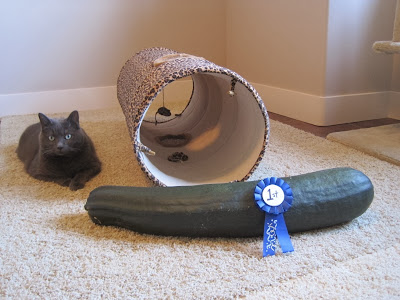 After a bit of time passed, I decided to take matters into my own paws and approach a bit closer to the big zucchini... 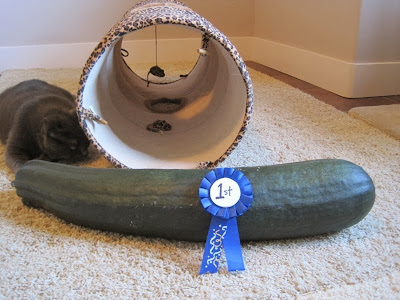 Oh and now I got even a wee bit closer and sniffed in its general direction...Now, what in the world is a big zucchini doing in my tunnel?   Audience, let's get to the bottom of theese mystery, shall we? 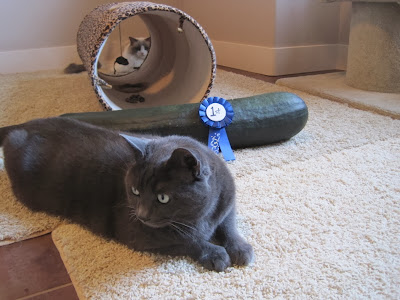 Well as it turns out, my tunnel had been doing a bit of gardening during its summer break when I was off camping in my tent!  It was growing theese big zucchini in the back of Headquarters.  Now let me remind you all that theese is no small feat...there are many-a-Marmot waiting in the wings just to walk off with one of theese zucchinis!  So the fact that it was able to stay put and reach 14 pounds was a miracle in itself!  But wait, there's more...

My tunnel was so proud of its accomplishment in growing theese big zucchini that it decided to enter it in a County Fair!  The big zucchini won 1st prize!  Isn't that fantastic, felines? 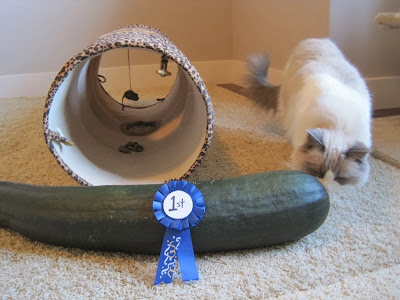 Secretary Neytiri's curiosity finally got the better of her and she too checked out the zucchini close-up, giving it some good whiffies.  Suddenly, her "wheels started to turn" bigtime as she realized theese zucchini was "baker's gold"!  She could finally put her "Martha Stewart Baking Lessons" to a real test...

Join me each TUESDAY felines for other magical and mysterious appearances in my tunnel.
Posted by Clooney at 9:16 PM